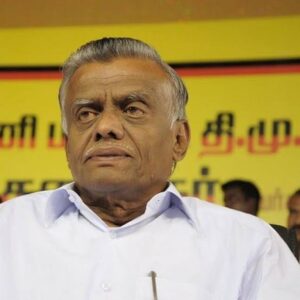 Former Tamilnadu Assembly Speaker Sedapatti Muthiah passed away due to age-related illness at a private hospital in Madurai. He was 76.
Muthiah was chosen to stand from Sedapatti constituency under which hometown comes based on the support he had as a Student Leader in 1977. He won the elections and got elected to the Legislative Assembly. He went on to win consecutive elections from Sedapatti. He was made the Speaker of the Assembly in 1991 and continued his tenure till 1996. During his time T.Kallupatti transitioned itself from a sleepy small village into a Town Panchayat administering 42 villages. He was elected as a Member of Parliament twice from Periyakulam Constituency for Ninth Lok Sabha and Twelfth Lok Sabha. In the Twelfth Lok Sabha he Served as a Union Minister for Surface Transport in Atal Bihari Vajpayee cabinet.He was in the post for a short period of time and had to resign due to a case in Chennai court. He graciously resigned from the post and faced the charges for the 42 lakh case.