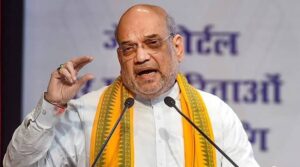 Union Home Minister Amit Shah on Friday launched a blistering attack on Bihar Chief Minister Nitish Kumar stating that the JD(U) chief “backstabbed” the anti-Congress politics from which he emerged and “sat on the laps” of Lalu Yadav to become the Prime Minister.
While addressing the ‘Jana Bhavna Mahasabha’ in Bihar’s Purnea, the first ever since the split of BJP and JD(U) alliance in the state, Shah said, “Nitish Kumar backstabbed the anti-Congress politics, from which he was born, and sat in the laps of RJD and Congress to become the Prime Minister.
Can Nitish Kumar become the Prime Minister by changing the party (alliance) with the desire for power? Can this government run in Bihar?”
Shah slammed the law and order situation in the state and said that there is an “atmosphere of fear” in the state since the Mahagathbandhan government returned to power.