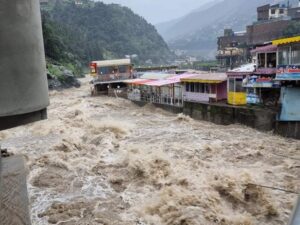 At least 1,695 people were killed while 12,865 were injured so far (October 2) since mid-June due to the devastating floods and rains in Pakistan, National Disaster Management Authority (NDMA) said on Sunday.Pakistan has endured severe monsoon weather since mid-June 2022, causing widespread flooding and landslides with severe repercussions on human lives, property, agriculture, and infrastructure.To date, 81 districts across five of Pakistan’s six provinces have been declared ‘calamity hit’ by the Government of Pakistan — with Balochistan, Khyber Pakhtunkhwa and Sindh provinces being the worst hit.As of mid-September, 33 million people had been affected, at least 1,481 persons have died, over 12,720 people have been injured and an estimated 7.6 million persons may be temporarily displaced.

The floods have also caused the damage and destruction of 1.8 million houses, with 1.5 million houses in Sindh province alone.Meanwhile, the United Nations is set to launch another appeal this week for an additional USD 600 million to Pakistan to help the country recover from the impact of the record-breaking floods.”2nd Follow-up meeting of Steering Committee for Coordination Regarding International Assistance for Flood Relief Activities, chaired by Mr Humair Karim, Acting Secretary EAD to discuss mapping of humanitarian assistance and relief efforts,” Pakistan’s Economic Affairs Division (EAD) said in a tweet.”The UN is in process of launching Revised Humanitarian Appeal on 4th of Oct in which additional USD 600 million will be asked for immediate relief assistance,” it added.The Dawn newspaper reported that Pakistan EAD Secretary Humair Karim informed donors and relief agencies that the UN would launch the revised humanitarian appeal on October 4 for USD 600m additional aid.