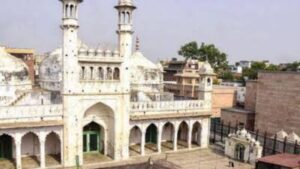 The Varanasi court on Friday deferred the judgment on a hindu-side plea, filed by five women petitioners, seeking carbon dating of the structure inside the Gyanvapi mosque that the Hindu side has claimed is a ‘Shivling’ to October 11. The Varanasi court will hear the Anjuman Islamia Committee’s arguments and thereafter, the court would pronounce its order on October 11.
The court was supposed to pronounce its verdict on the plea filed by the Hindu side today. A heavy police force was deployed outside the premises of the court ahead of the crucial hearing.