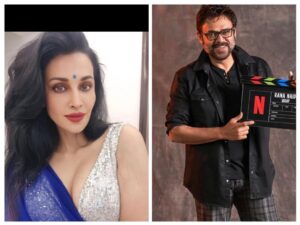 Actress Flora Saini to reunite with legendary actor Venkatesh after a span of 21 years after their very first time in a south film “Nuvvu Naaku Nachav” in the year 2001. Flora is popularly known as Asha Saini down in the South Indian film industry. This second association of Flora and Venkatesh is for the Netflix originals named “Rana Naidu” and is said to be an adaptation of Ray Donovan.
As soon as the trailer of Rana Naidu dropped fans have been talking about it and it’s getting a very good response.
A Netflix original “Rana Naidu” stars The official adaptation of popular American TV series Ray Donovan with the real-life nephew and uncle duo Rana and Venkatesh Daggubati, as a Mumbai fixer and his ex-con father.
Just before, the trailer of Rana Naidu dropped there were strong rumours of Flora being a part of the reality show Big Boss 16 hosted by Salman Khan. The news had been doing the rounds of the Internet for quite some time now but there has been no official confirmation on the same.
Flora previously has appeared in a lot of hit films like Stree, Dabangg 2, Lakshmi, Fraud Saiyaan, MSG, Begum Jaan etc. and hit OTT series like Gandi Baat Season 2, X.X.X, City of Dreams, Wanna Have a Good Time etc. Flora Saini was also in the news recently for launching her own app.