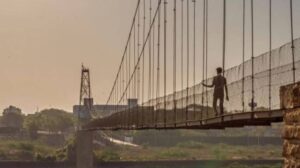 Prime Minister Narendra Modi on Tuesday will visit Gujarat’s Morbi where at least 134 people were killed when a suspension bridge collapsed into the Machchhu river.
The Gujarat Chief Minister’s Office announced that Modi would visit Morbi on Tuesday afternoon.
Rescue operations were in full swing at Morbi, around 300 km from Gujarat capital Gandhinagar, with teams of the National Disaster Response Force, State Disaster Response Force, Indian Air Force, Army and Navy joining local personnel in the effort.
Modi, who is on a visit to Gujarat, paid tributes to those who died in Sunday’s bridge collapse.
“I am in Kevadia, but my heart goes out to those who died in the Morbi bridge collapse tragedy,” the prime minister said as he got emotional.