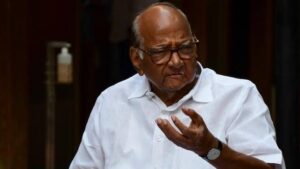 Due to ill health, Nationalist Congress Party (NCP) chief Sharad Pawar has been admitted to a Mumbai hospital, his party said on Monday.
The 81-year-old former Union minister has been taken to Breach Candy hospital in Mumbai and will remain admitted for the next three days, the NCP said in a statement.
“According to the request made by the state general secretary of the party Shivajirao Garje through an official letter, all office bearers and workers of the Nationalist Congress Party should not gather outside the hospital,” the NCP said.
“After that (being discharged), he will participate in party camps that will be held in Shirdi on November 4-5,” the NCP added.