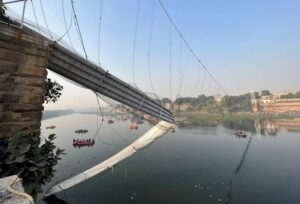 The death toll from a foot bridge collapse in Gujarat rose to 134 on Monday, including many children, as police detained nine people as part of a criminal investigation into one of the deadliest accidents in the country in the past decade.
CCTV footage from just before the collapse showed a group of young men taking photos while others tried to rock the suspension bridge from side to side, before they tumbled into the river below as the cables holding it together gave way.
Police in the Gujarat, where the disaster occurred, said they had detained nine people after registering a criminal case against unnamed people responsible for the renovation, maintenance and management of the bridge.