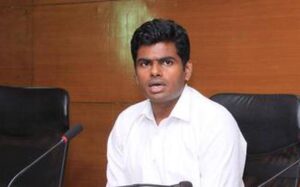 The BJP’s intention was not to trouble the Tamil Nadu government or the state police over the October 23 fatal car explosion in the city but make them take corrective measures and also expedite the probe, the saffron party’s state president K Annamalai said on Monday.
The TN BJP chief, who has raised a number of questions vis-a-vis the probe into the matter, which has since been transferred to the National Investigation Agency (NIA), alleged there was specific systematic failure in preventing the incident, despite central intelligence inputs over the movement of ‘radicalised’ youths.
“I don’t want to give trouble” to the government and police but he was raising the questions in the interest of the state and for expediting the probe, Annamalai told reporters. Reiterating the Centre had given specific alert to three states and three cities, including Coimbatore, Annamalai said the state government and the police, instead of announcing it just as a cylinder explosion, should have described it as a terror attack or suicide attack so that the people of the city could be more alert.