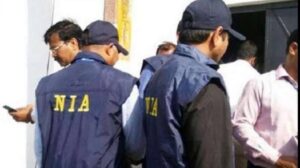 Handwritten notes indicating radicalisation, IS-related symbols and classification of people are among the material recovered from the house of Jamesha Mubin, a man killed in a car explosion in this city on October 23, an incident that has sent shock waves across the state and raised apprehensions of a possible terror angle into the blast.
The National Investigation Agency (NIA) is now probing the case, even as the City Police had earlier included the Unlawful Activities (Prevention) Act in the FIR regarding the incident.
“Allahuvin illathinmeedhu kai vaithal veraruppom” (Those who touch the home of Allah will be uprooted) written in Tamil on a slate was recovered from the house of Mubin.
Other documents seized from Mubin’s house by the city police, which initially probed the matter and some strong writings on ‘Jihad’, diagram of a flag of terror outfit ISIS and classification of mankind as “Muslims” and “Kafirs”, point to possible radicalisation, police sources said.