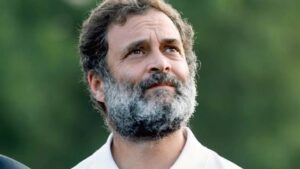 Congress leader Rahul Gandhi on Tuesday alleged that the ruling Bharatiya Janata Party (BJP) and Rashtriya Swayamsevak Sangh (RSS) agenda is to develop fear in the minds of people on the basis of discrimination and then convert that fear into hate between religions and castes.
Addressing a gathering in the Nanded district of Maharashtra during Bharat Jodo Yatra, the Congress MP said, “BJP and RSS agenda is fixed, they first developed fear into people’s mind,and then convert that fear into hate between religions and castes. We will continue our Bharat Jodo Yatra and it will end in Jammu and Kashmir in Srinagar.”
Slamming the Centre over demonetization, Rahul Gandhi said that the BJP government’s decision destroyed poor farmers, small businessmen, shop owners and others.