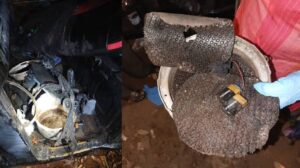 Mangaluru auto blast accused Mohammad Shariq wanted to carry out an explosion at a children’s fest organised by one of the organisations affiliated to Rashtriya Swayamsevak Sangh (RSS), sources said on Thursday.
According to them, the investigation teams have found that Shariq wanted to carry out the blast at the state level child fest programme by Keshava Smrithi Samvardhana Samithi, which comes under RSS.
More than 10,000 people attended the programme organised at Sanghaniketan on November 19 with their children. Several senior RSS leaders were also present on the occasion. The accused had planned to attend the programme in the guise of a student and carry out the blast.