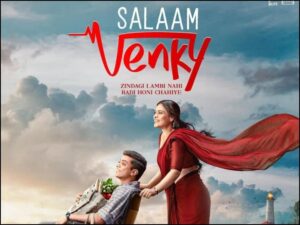 Fear should not override the spirit of celebrating life, says Kajol about her upcoming feature “Salaam Venky”, a film she initially was unsure about becoming a part of.Helmed by actor-director Revathy, the movie is inspired by the true story of the young chess player Kolavennu Venkatesh, who had Duchenne muscular dystrophy (DMD). He died in 2004.Kajol, who is a mother of two, said working on ”Salaam Venky” drew so much out of her that she shot the majority of the scenes without glycerine.”It’s not the kind of film that you can ever do without feeling. I wasn’t sure whether I wanted to do the film because it’s a subject that is everyone’s nightmare. It was difficult for me to say yes to it.”The great thing about Revathy is she made it easy as we were in the same situation day in and day out and it takes that fear away, besides ‘Salaam Venky’ is written so beautifully. It is a celebration of life and the film teaches you that life should be a celebration,” the 48-year-old actor told PTI in an interview here.DMD is a genetic disorder which causes skeletal and heart muscle weakness that gets worse with time. Venkatesh’s death sparked a debate about euthanasia, commonly known as mercy killing, in India.Asked about her views on euthanasia, Kajol responded with a dialogue from ”Salaam Venky”: ”One has the right to live and die with dignity.” ”I am in two minds over it not because of anything else, but because we know humanity and there are a lot of people who would take advantage of a law like that. It’s a questionable thing for sure,” she said.The actor further said many people realised the importance of living life to the fullest during the Covid-19 pandemic, which hit India in March 2020.

Tags:‘Salaam Venky’ is a celebration of life: Kajol