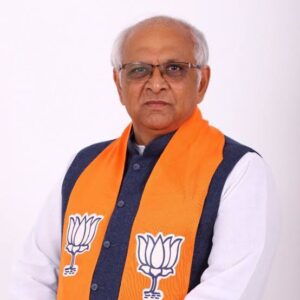 The new chief minister of Gujarat will be sworn in on December 12 at 2 pm, state BJP chief CR Paatil said on Thursday as the party swept the Assembly polls with a record-breaking margin.
Prime Minister Narendra Modi and Union Home Minister Amit Shah will take part in the oath-taking ceremony.
Bhupendra Patel will take oath as chief minister of Gujarat for the second time. He was first elected as BJP legislative party leader on 12 September 2021.
“Gujarat CM will take oath at 2 pm on 12th December. PM Modi and Union Home Minister Amit Shah will take part in the oath ceremony,” CR Paatil said while addressing a joint press conference with Chief Minister Bhupendra Patel after the trends suggested BJP’s majority in the state, empowering the party to form the government for the seventh time in the state.
“Bhupendra Patel will be the chief minister again,” he confirmed. Patel said that the BJP humbly accepts the mandate of the people of Gujarat, while also reassuring the public of the party’s commitment towards public service.