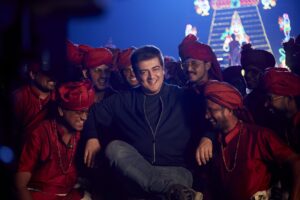 Zee Tamil said it has given its own twist to Labour Day, ‘celebrating Valimai Day on 1 May and airing the world television premiere of the popular entertainer starring Ajith Kumar at 6.30 pm.’

‘Directed by H Vinoth, Valimai will kick off this special holiday with a bang. Starring Ajith Kumar, Kartikeya Gummakonda and Huma Qureshi in lead roles, the movie revolves around ACP Arjun (Ajith Kumar), a police officer who goes to any extent to keep the city safe. Naren a.k.a. Wolfranga (Karthikeya Gummakonda), on the other hand, wants to ruin the lives of all the unemployed youngsters.

With a spike in the crime rate due to the nefarious activities of Naren’s motorcycle gang, it is up to Arjun to restore law and order,’ a release said.