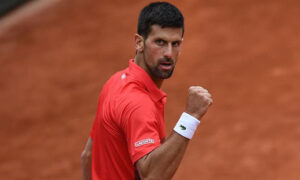 I have a lot of respect for him (Schwartzman). He’s a good person off the court, said Djokovic who has now beaten Schwartzman seven times in seven meetings.

Djokovic is still to drop a set at Roland Garros after cruising through the first week.

He has also won 22 sets in a row, stretching back to his Italian Open title triumph in Rome earlier this month.

I’ve made a good start but I have a lot of work to do, added Djokovic.

Sloane Stephens reached the quarter-finals at Roland Garros for the third time on Sunday by thrashing Switzerland’s Jil Teichmann 6-2, 6-0 in the last 16.

The German had to save three set points in the first set and make a comeback from 4-2 down and 15-40 on his own serve in the second while also hitting seven double faults in a rollercoaster performance.

He was driving me nuts, Zverev said. He is one of the fastest players. I felt every return was put on the baseline.

American teenager Coco Gauff hit one backhand around the net post in the first set along the way to earning a berth in the French Open quarterfinals for the second consecutive year.

The 18-year-old American took over from 4-all in the opening set en route to beating No. 31 seed Elise Mertens of Belgium 6-4, 6-0 at Court Philippe Chatrier on Saturday.