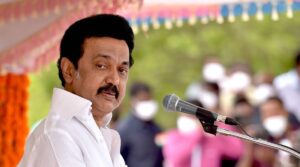 Chennai :Chief Minister M K Stalin slammed the opposition parties for needlessly faulting the DMK government on the law and order issue and said the situation was stable as a result of which the state had drawn the attention of investors. Rejecting the charge of the opposition parties that law and order had deteriorated in the state, he said after taking up the reins as the Chief Minister he had transformed Tamil Nadu into an Eden of Peace. ”There are no caste or communal clashes, police firing or other crimes. Due to effective administration, the crimes have been kept under check and the state has transformed into an Eden of Peace,” Stalin claimed. As a result, the industrial environment changed for the better and the state attracted the attention of investors. ”Investments have started flowing into Tamil Nadu because of the prevailing peaceful atmosphere,” Stalin said when his attention was drawn to the allegation by the AIADMK and BJP on the deteriorating law and order situation.

The Chief Minister who wound up a hectic two-day tour of the Cauvery delta districts, accused the opposition parties of ”doing politics.” ”But we are here to do good to the people,” he added.
Set law and order right in State: OPS Earlier, AIADMK coordinator O Panneerselvam urged the DMK government to immediately set right the Law and Order issue in the State. The AIADMK leader’s statement came after a woman government staff was brutally attacked by her colleague in the Theni district recently. Stating that the growth of the State depends on how the Law and Order was maintained, Panneerselvam said at present, the State is witnessing murders, suicides, and sexual harassment in the “Dravidian” model rule. Narrating the incident, the AIADMK leader said that a female government staffer, who was in charge of the rural development office in the Theni district, was brutally attacked by her male colleague, who was transferred for wrongdoings. “From this incident, a situation was created that the government officials should have to act in fear for their subordinates,” he claimed. Panneerselvam also said that if the attack incidents continue to occur, a stage will come to frisk all the persons, who would be coming to the government offices.