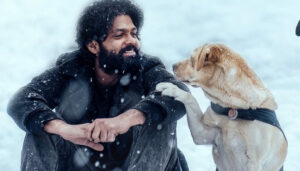 Charlie 777 starring Rakshit Shetty is a poignant tale of man and his love for his pet dog.

Written and directed by Kiranraj K and produced by GS Gupta and Rakshit Shetty under the banner of Paramvah Studios, the Tamil version is presented by Karthik Subbaraj’s Stonebench Films.

The adventurous comedy 777 Charlie follows the journey and bonding between a lonely factory worker and a Labrador.

Dharma (Rakshit) is a loner, who doesn’t socialise with people, spends his time by working in a factory. Charlie, a small Labrador dog makes a complete changeover in Dharma’s life. In the companionship of the little Charlie, Dharma finds his purpose in life and develops himself into a better human.

Rakshit has played his part to perfection. Anger, agony, deceit brought out well. He carries the whole movie in his shoulders. The dog trained well walks away with applause.

Nobin Paul music adds emotional quotient to the movie while the rest of the cast including Sangeetha Sringeri, Raj P Shetty, Danish Sait and others play their part well.

Arvind S Kashyap has handled the cinematography and Pratheek Shetty is in charge of the editing.

All said, 777 Charlie is a poignant tale that deserves a watch.