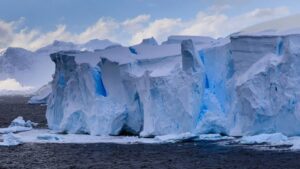 Now, the icy continent at the southern tip of the world — which is visited mostly by scientists — joins the remote reaches of the planet where researchers have documented the presence of these tiny pieces of polymer.
Researchers gathered snow samples from 19 different sites in Antarctica’s Ross Island area and found an average of 29 particles in each sample. The majority of the particles were from a type of plastic found in clothing and water bottles.
The researchers’ discovery, published earlier this week in the journal The Cryosphere, suggests not even remote Antarctica ecosystems will avoid contamination from microplastics.
“It’s incredibly sad but finding microplastics in fresh Antarctic snow highlights the extent of plastic pollution into even the most remote regions of the world,” Alex Aves, a lead author of the study, said in a news release.
The ubiquity of microplastics is of growing interest and study by researchers because they are associated with potentially irreversible negative environmental effects and could affect human health. Early studies suggest concentrated exposures to microplastics in humans could cause inflammatory responses and cell damage, but scientists say more research is needed to understand what risks, if any, microplastics pose.
Tags:Antartica Plastic