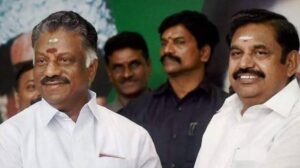 The O Panneerselvam (OPS) camp of the AIADMK which is battered and bruised in the ongoing power struggle within the party is conducting hectic lobbying with the Thevar community leaders and the national leadership of the BJP to stay afloat in the party.

The party general council is slated to be on July 11 which is strongly being objected by OPS faction.

The party general council also elected A. Tamilmagan Hussain as the presidium chairman. This was strongly opposed by the OPS faction stating that this was against the party constitution.

With almost all the district secretaries and party state council members throwing their weight behind EPS and his factions demanding a single leadership, OPS need the support of external elements.