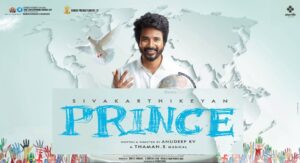 Actor Sivakarthikeyan is currently working his Tamil-Telugu bilingual film Prince, which has wrapped up with major portions of the shooting, according to latest reports. Helmed by Anudeep KV, the film is scheduled to hit the big screens for Diwali this year. The film, which has music by Thaman and is produced by D Suresh Babu, Narayan Das K Narang, and Puskur Ram Mohan Rao through Suresh Productions Pvt, Sree Venkateshwara Cinemas LLP, and Shanthi Talkies. Besides Sivakarthikeyan, the film also features actors Sivakarthikeyan, Maria Ryaboshapka, Sathayaraj among others.