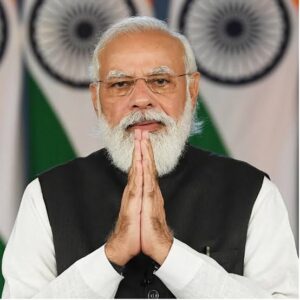 Prime Minister Narendra Modi in a veiled attack on the Opposition parties in the country, said that “people who do not care about the country, stay indifferent to the problems faced by the nation”. Praising the efforts by the NDA government in the last eight years, he said that it is easy to form a government, but the BJP has “chosen the path of building the nation…which takes hard work.”
“It doesn’t take that much effort to form a government, but to form a country, hard work is essential,” PM Modi said while addressing the ‘Har Ghar Jal’ event.
“We (the BJP government) have chosen the path of building the nation. Hence, we are continuously working towards addressing and solving the challenges of both – the present and the future,” the Prime Minister said.
Taking a dig at the Opposition parties, he continued, “People who do not care about the nation don’t show any concern or interest towards these problems. They can make big promises for the provision of water, but will never work towards it with a vision.”
The Prime Minister had last month warned against the culture of freebies, which certain political parties indulged in.
On Monday, the Supreme Court adjourned hearing of a plea against promises by political parties to distribute freebies from public funds during election campaigns. Asking the parties to file their suggestion by Saturday, the Supreme Court said the concern was about spending the public’s money in the correct way.