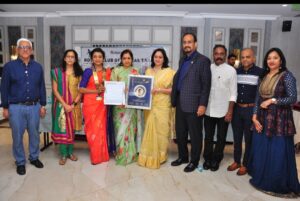 The Rotary Club of Madras T Nagar bestowed the Iconic Woman award to Dr Thamizhachi Thangapandian, MP, South Chennai in the presence of Rotary District 3232 Governor Dr N Nandakumar & District First Lady Dr Sumedha Nandhakumar.
While accepting the award, Thamizhachi said that she felt honoured that an institution like the Rotary, known for having eradicated Polio in India and most of the world, and known for its yeoman service in the areas of education, health, water and sanitation, and many needy areas, for marginalised communities, was presenting her with this award.
She spoke about her literary works, read a few passages, simultaneously explaining to the audience the context, mostly related to her rich life experiences while growing up in rural Tamilnadu with her then Headmaster father and school teacher mother. She is very active in educating and uplifting the lives of women and children not only in her constituency but also in her native village, a press release said.
Tags:South Chennai Rotary Award