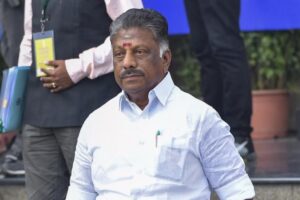 Chennai: O Panneerselvam (OPS) faction of the AIADMK has received a setback after the Justice (Rtd) Arumugasamy commission, probing death of former Chief Minister J. Jayalalithaa, recommended an inquiry against Jaya’s former aide, V.K. Sasikala and a few others.

The Justice (Rtd) Arumugasamny commission report was tabled in the Tamil Nadu legislative Assembly on Monday and the state government has decided to seek legal opinion on the report.

Notably, M.K. Stalin had during the 2021 election campaign stated that if the DMK was elected to power, it would conduct a detailed probe into the circumstances leading to the passing away of J. Jayalalithaa while under treatment at a prominent Chennai hospital.

The commission recommending an inquiry has pulled back the efforts of former Chief Minister and AIADMK coordinator O. Panneerselvam to forge an alliance with Sasikala and her nephew T.T.V Dhinakaran and to try and capture the party.

Tags:O Panneerselvam (OPS) faction of the AIADMK has received a setback after the Justice (Rtd) Arumugasamy commissionprobing death of former Chief Minister J. Jayalalithaarecommended an inquiry against Jaya's former aideV.K. Sasikala and a few others.