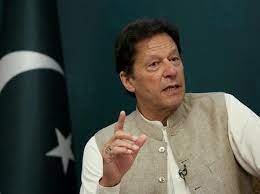 Former Pakistani Prime Minister Imran Khan on Tuesday accused the ruling coalition of trying to pit him against the military and judiciary and said that the government is “scared of him winning the elections”, media reports said. The former premier made these remarks during a public rally in Peshawar and said, “The three stooges, including Pakistan Democratic Movement (PDM) chief Maulana Fazlur Rehman, know they cannot defeat me in elections. That’s why they are hatching conspiracies to get me disqualified.”

The Pakistan Tehreek-e-Insaf (PTI) Chairman Imran Khan accused the ruling government of hatching a conspiracy to derail his “positive prospects” of winning the elections. He accused the government of deliberately trying to create discord between him and the state institutions, reported The News International. “I have stated that the army chief should be selected on merit and I still stand by my statement as there was nothing wrong with it. I have further stated that the two dacoits, Nawaz Sharif and Asif Zardari, should not select the future army chief,” the former Prime Minister added.Clarifying his previous comments that Imran Khan made in a public rally in Faisalabad where he criticized the government for delaying the elections to appoint an army chief of its own, Khan said that he made such remarks as Nawaz Sharif was a criminal. He alleged that former Prime Minister Nawaz Sharif was convicted by a court on corruption charges of billions of rupees and then escaped from the country. “The people of Peshawar should tell me if a person convicted by the court in corruption of billions of rupees should have the right to select the army chief,” he asked the participants of the public rally.It is worth noting that Imran is contesting by-elections for the National Assembly from Peshawar and is facing tough competition from an elderly Pakhtun nationalist leader, Haji Ghulam Ahmad Bilour, commonly known as Haji Bilour. Ghulam Bilour is a senior leader of the Awami National Party (ANP) and is a joint candidate of the Pakistan Democratic Movement (PDM). Furthermore, Imran Khan who is also surrounded by terrorism charges for making defamatory comments against a judge said in his defence that he had never intended to threaten a judge but the way his chief of staff Shahbaz Gill was treated during the investigations, it hurts him, as per The News International.

Tags:Imran accuses govt of pitting him against country's military