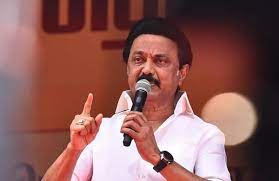 Chennai: Chief Minister M K Stalin on Tuesday said that religious belief is a private affair and it will not be against the belief of others.The comment comes at a time when there are complaints from various political parties in the State that the upcoming rally by RSS is planned to distort the prevailing religious harmony in Tamil Nadu.Stalin chaired the 75th anniversary function of the Church of South India (CSI) and while delivering his address Stalin stressed on the need for religious harmony in the society. “People of various religious beliefs live in India. Despite this, people of various religions live peacefully. Religious belief is a private affair and is not against the belief of others. Majority of the preachings of Jesus Christ stressed on love not just on us but also on others,” said Stalin.He also said that the ongoing Dravidian model rule works on the principles of equality, fraternity, unity, mercy, justice and sacrifice and the Dravidian model is based on “everything is for everyone.” He also urged the members of CSI to save democracy and society by standing united and cutting across caste and religion.

Tags:'Religious belief is a private affair'