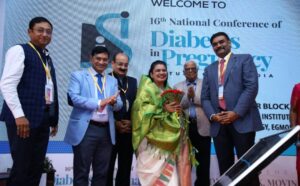 Leading doctors have expressed concern over the phenomenal increase in diabetes among pregnant women in India. Women during the postpartum period find it tough to get back to their normal glucose level and eventually fall into the category of type II diabetes.
A cross-section of doctors were speaking at the 16th national conference of the Diabetes In Pregnancy Study Group of India (DIPSI), held at the Institute of Obstetrics and Gynecology, Egmore recently. According to renowned healthcare leader Dr. Hema Divakar, Chair of well woman healthcare committee at FIGO (International Federation of Gynecology and Obstetrics) based in Bengaluru, India is the world leader in reporting diabetes cases. She added that even pregnant women are also adding considerably to the increasing numbers.
Dr. Hema said that no fewer than 30 million pregnancies are reported in a year in India. Of them, nearly five million develop diabetes in pregnancy. After the delivery of a baby, mothers are expected to have a normal level of glucose for a span of six weeks. Unfortunately, 50% of them are unable to achieve it for various reasons like hereditary, obesity, lifestyle, and food habits, among others. Unfortunately, they fall into type II diabetes sooner or later. She said it is not just mothers who are affected; diabetes gets transferred at the foetal level itself.