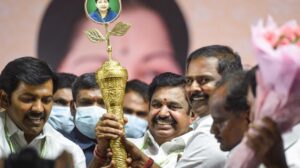 Chennai :AIADMK interim general secretary Edappadi K Palaniswami in Salem on Thursday said there is no possibility of reunion with those who worked against the welfare of the AIADMK.There will never be a place in AIADMK for those who attempted to break the party on the instigation of others. I am firm not to function by joining with them,” he told reporters.Responding to a remark by O Panneerselvam supporter R Vaithilingam that BJP has the right to interfere in the internal matters of the AIADMK, EPS said the real cadre of AIADMK would never accept interference of others in party affairs.