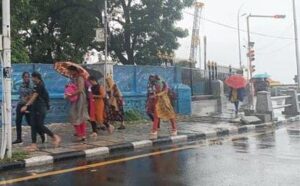 The Indian Meteorological Department (IMD) on Wednesday informed that rains would continue till November 6, as it was earlier speculated the weather would prevail till 4 Nov. Also, neighbouring regions Karaikkal and Puducherry will receive heavy rains accompanied with thunderstorms in the next 24 hours. Chennai has been getting unprecendented showers in the last 24 hours. During this period, the highest amount of rainfall was recorded in Redhills at 13 cm, and Puzhal 12 cm. In Chennai, the rainfall recorded from October 1 – November 1 was 20 cm, against 28 cm of rainfall, which has decreased by 29 per cent, stated Dr S Balachandran, Deputy Director- General of Meteorology, Regional Meteorological Center (RMC).