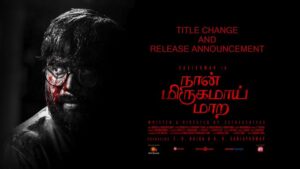 Naan Mirugamaai Maara starring Sasikumar, Hariprriya, Vikranth in the lead roles is releasing 18 November.
Produced by Chendur Films International and directed by Sathyashivaa, this film’s pre-release event took place yesterday in Chennai.Editor Srikanth said, ‘We have tried out a new style of editing for this film. Hope everyone likes it. I have seen Sasikumar from a distance when I was in college. I am very happy that I am working with him right now.’

Ghibran, music composer, said, ‘ I really liked director Sathya Shivaa self-confidence. He intended to craft a novelty in the background score of this film. He insisted that a new flavour of music should be made and it has to be from the sounds we hear on a daily basis, rather than the sound of musical instruments. Though it was initially difficult to understand, later I comprehended and composed the music as per his requirements.’Sathyashivaa said: ‘We have followed something new in this film. When you look at it as a film, you will definitely like it. For example, there is a pattern in this film. In the initial phases, I felt it difficult to convey this to the cast and crew. But I am very happy with the way the film has evolved right now. I hope people like and support the film, despite the violence which is much needed.When I narrated the story of the film to Sasikumar over the phone during the Covid-19 lockdown, he readily agreed as it was way different from his style. I have to say that he has lived in this film as an actor, forgetting the director within him.Ghibran was very happy when I told that there were no songs in the film. We all know that he is a master of background music! Ghibran has proved it yet again.’
Sasi kumar said, ‘It has been a year since I acted in the film. The film was originally titled ‘Common Man’. Then that title was changed to ‘Naan Mirugamaai Maara’.There will be a lot of violent scenes in the film. However, the emotions of an average man are used correctly in the story with the usual family sentiments. I’d also like to add that Ghibran’s background score has added strength to the film. This is the first time I have worked in a film without a song. I was very happy that there was no dance in the film. The role of a sound engineer was very different for me, who had always roamed around in the field with a dhoti as a village hero. I watched sound engineers Lakshmi Narayanan and Udhayakumar closely before undertaking this role. Everything in the film will be new. We have all worked hard for this. The entire team has realised their importance and has contributed well. I’m not saying that the film is like this, it’s like that, you just look at it and tell me how the film is.’