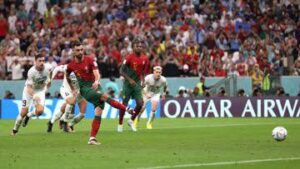 Portugal joined Brazil and France in the round of 16 of the FIFA World Cup 2022 after beating Uruguay 2-0 in their group H fixture. Bruno Fernandes found the net twice for Portugal in the second half, putting his sublime touch in otherwise a scratchy affair between the two teams.
The Europeans had dominated possession before Fernandes’ 54th minute cross floated past Uruguayan goalkeeper Sergio Rochet, who was rooted to the spot as Cristiano Ronaldo rose to head the ball and initially celebrated the goal as his.
The team did not take a single shot on target in the first half of the game but upped their intensity against Uruguay, who has the better chance in the game. Rodrigo Bentancur almost walked into the goal beating three Portuguese defenders in the first half, but found Diogo Costa’s midrif.