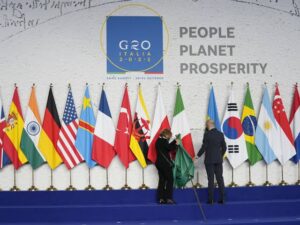 India will formally assume the G20 presidency starting Thursday, thereby beginning a unique opportunity for the country to contribute to the global agenda on pressing issues of international importance. G-20 is the premier forum for international economic cooperation representing around 85 per cent of the global GDP, over 75 of the worldwide trade, and about two-thirds of the world population, according to Prime Minister’s Office (PMO) release.
During the G-20 Presidency, India will hold about 200 meetings in 32 different sectors in multiple locations across India. The G-20 Summit to be held next year would be one of the highest-profile international gatherings to be hosted by India. Earlier this month, Prime Minister Narendra Modi unveiled the logo, theme and website of India’s G-20 Presidency via video conferencing. The lotus in the logo symbolises India’s ancient heritage, faith and thought.
The Philosophy of Adwait, the Prime Minister said, emphasises the oneness of all creatures and this philosophy will be a medium of resolution of today’s conflicts. This logo and theme represent many key messages from India. “Message of Buddha for freedom from war, Mahatma Gandhi’s solutions in the face of violence, through G-20, India is giving them a new height”, he said.
The Prime Minister remarked that India’s G-20 presidency is coming at a time of crisis and chaos. He said that the world is dealing with the aftereffects of a disruptive once-in-a-century global pandemic, conflicts, and economic uncertainty
Tags:G20 India Modi