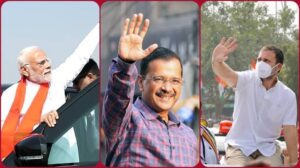 As the counting of votes progresses in the Municipal Corporation of Delhi polls, both Bharatiya Janata Party (BJP) and Aam Aadmi Party (AAP) are claiming to win the polls but the latest trends suggest AAP securing 107 seats so far and leading in 25; while the BJP is leading on 20 wards (winning 85) so far.
BJP leader Parvesh Verma said that the people of Delhi have seen the “lies” of Chief Minister Arvind Kejriwal and have voted for the BJP.
“The people of Delhi know about Kejriwal’s lies and are happy with the work by the MCD. There could be some anti-incumbency because of the 15-year-long rule. The people have seen the work that we have done during COVID and for the parks and hospitals. I am sure that we will win the elections,” he said.
AAP MP Raghav Chadha said that BJP covered the city in the garbage and the AAP will clean the city once it wins the polls. “Mayor will be from AAP. BJP had covered Delhi in the garbage, it’ll be cleaned and Arvind Kejriwal’s govt will be formed in MCD.