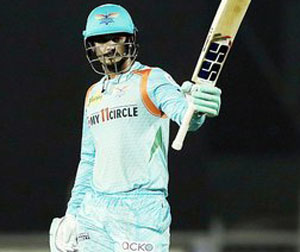 Mumbai : It was a brilliant show by South Africa’s Quinton de Kock, who slammed 80 off just 52 balls as Lucknow Super Giants registered their third-successive win of the season, defeating Delhi Capitals by six wickets.

Chasing a 150-run target, LSG made a bright start — thanks largely to De Kock, whose 19-run over against Anrich Nortje turned the tide in LSG’s favour. Even as KL Rahul (24) and Evin Lewis (3) were dismissed in quick succession, De Kock continued on his strong outing and steered the side in the run-chase.

When he fell, LSG required 28 runs off 25 deliveries and even as Mustafizur Rahman and Shardul Thakur conceded only 9 runs in the next two overs, Ayush Badoni kept his calm to steer the LSG to win. Earlier, Prithvi Shaw slammed 61 but the rest of the batting lineup failed to step up as LSG restricted DC to 149/3.

Quinton de Kock, Player of the Match, said, ‘ It was a matter of just playing what’s in front of you, reacting to it. It was a chaseable score. You want a decent start in the powerplay and we didn’t want to get too ahead in the chase. Was important to keep wickets in hand. Prithvi did make it look easy, for me I also felt that it was a slow surface. Even with the dew, there was a bit of grip. If we were chasing 180, might have been difficult but thanks to our bowlers.’

KL Rahul, said, ‘ I think we were brilliant (with the ball). In the powerplay, we obviously need to go back and work on. But that’s how powerplays go sometimes. We assessed things well after that and bowled better. Obviously, would have loved the bowlers to assess things a bit earlier, but it was nice to see them discuss the lines, lengths and pace to bowl after the powerplay. That was the honest reason actually (on him saying at the toss that he had no idea why he opted to bowl).

Can’t make up a reason everytime. You don’t know what to expect of the pitch. Early on in the competition when the pitches are fresh, teams might want to bowl first.

Once the tournament goes on and the pitches grip a bit, teams might want to bat. He (Badoni) has held his nerve everytime he has gone into bat and he’s delivered for us under pressure. Great learning for him, important for him to keep working hard and stay humble. Been a complete team effort so far. The way everyone has stepped up has been brilliant.’

Rishabh Pant, said, ‘When the dew is like that you can’t be complaining, as a batting unit we were 10-15 short, at the end Avesh and Holder pulled it back, credit to them. We were talking about giving 100% till the last ball of the 40th over, no matter what happens [on his chat to the team before the start of the 2nd innings].

The powerplay was fine, we didn’t get any wicket, our spin attack did well in the middle overs but in the end we were 10-15 short.’