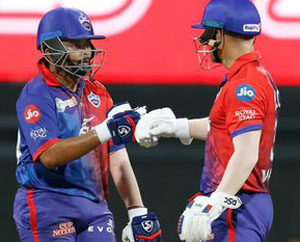 Mumbai : Delhi Capitals dictated the proceedings in the Indian Premier League clash against Punjab Kings as they won the contest by nine wickets. They started the match on a strong note and bowled out Punjab for a paltry 115 in 20 overs.
In response, the opening pair of David Warner and Prithvi Shaw got Delhi to a flying start. The pair added 81/0 in the first six overs, which is also the highest by the franchise in the power plays. Shaw was dismissed by Rahul Chahar on 41 off 20 balls. Warner and Sarfaraz Khan then guided the side home with 57 balls to spare.

Earlier in the evening Shikhar Dhawan, Mayank Agarwal, and the in-form batter Liam Livingstone failed to provide Punjab with a good start and were dismissed inside the powerplay overs. Jonny Bairstow also failed to do much. Jitesh Sharma along with Shahrukh stitched a small partnership before the former was trapped LBW by Axar Patel. Among the DC bowlers, Kuldeep Yadav, Axar Patel, Khaleel Ahmed, and Lalit Yadav scalped two wickets each.

Kuldeep Yadav, Player of the Match, said, ‘I would like to share this award with Axar. He bowled well and took important wickets in the middle. I have played a lot against KG (Rabada) and I know he does not move his feet much, my plan was to bowl one chinaman and then the googly. The second wicket was due to Rishabh telling to bowl from round the wicket. To be very honest, I have got plenty of confidence this season and I am also mentally clear with my role. I just focus on my line and length and not on what the batter is going to do.

I don’t watch videos now, when you are very confused you watch videos to see what a batter might do. I am enjoying my bowling after a long time and the credit goes to Rishabh for backing me. That gives a lot of confidence for a bowler and that is a plus point for us.’

Rishabh Pant, Winning captain, said, Obviously there was confusion in our camp because in the morning we got to know that Tim (Seifert) is also positive. There was some confusion, nervousness and what are we going to do now kinda feeling, but we spoke in the team meeting and pointed out on what we can focus, there was so much noise from the outside that we thought we will focus on the match. Mostly I like to leave them (Shaw and Warner) lone as everyone knows their roles in the team. We will look to improve in every match and that’s the only thing we can control, results are not in our control but we can learn from our mistakes. On a wicket like this I thought the ball was stopping a bit and that’s why I used more of the spinners.

Mayank Agarwal, losing captain, said, ‘ It’s a tough one, a day to forget for us, best to move on and not think too much into the game. We didn’t bat and bowl well, we just need to move on from today. We have been losing too many wickets too early, that’s a concern. Don’t want to dwell too much, if we do so, a lot of negatives will come out. A total of around 180 could have been competitive. In hindsight, I could have given a couple of overs early for the spinners, but I didn’t do so.’

David Warner, said, ‘I think the bowlers did a fantastic job and made it easier for us. We had to go hard in the powerplay during the chase. It was a different surface compared to the last night, but credit to our bowlers. Was grateful that we were able to get out of our rooms and play tonight.

I was just trying to be positive and am happy to have played with Shaw.. For me it’s about sticking to the basics and I tried to put my best footwork forward, hopefully I ll be able to do going forward. My kids just want to know why I cannot get hundred like Jos (Buttler) does. It’s great that the little ones around the world keep watching this game.’
Tags:2022.axar pateldavid warnerdelhi capitalsindian premier leagueipljonny bairstowkhaleel ahmedkuldeep yadavLalit Yadavmayank agarwalprithvi shawPunjab KingsRishabh Panshikhar dhawan