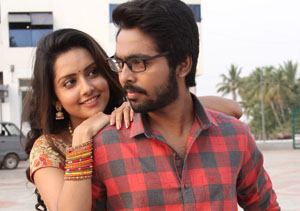 GV Prakash, after good outings in films like Bachelor and Selfie, is ready with Ayngaran. Directed by Eeti fame Ravi Arasu, it is a movie made with a purpose. G V Prakash, who, apart from playing the lead, has also scored music for this film.

Mahima Nambiar is the heroine.

Cinematography for the film is by Saravanan Abimanyu and editing is by Raja Mohammed.

GV Prakash plays an young mechanical engineering graduate who thinks out of the box and tries coming up with inventions that serve the society.

But when he tries to get it patented, he face roadblock in the form of red tapeism.

The story is about how a crime takes place and the police is clueless about who the criminals are.

Meanwhile a kid falls in an open borewell and when officials are clueless about rescue act, there comes GV Prakash who with the help of his invention is able to pull out the child alive.

There is a connect to the kid falling inside the hole and the jewel thieves. How GV Prakash cracks it forms the end.

GV Prakash does a good act. At ease in emotions scenes too, he tries action avatar in Ayngaran. Mahima Nambiar is cute and bubbly.

Though Ayngaran reminds one of Aram at places, Ravi Arasu’s execution makes it a meaningful movie. Produced by B Ganesh and Subha Ganesh, Ayngaran is decent entertainer.