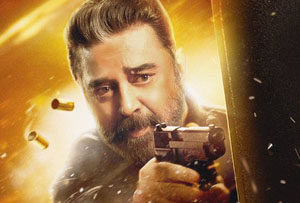 The makers of Kamal Haasan’s Vikram have announced that the film’s audio and trailer will be launched on May 15.

Anirudh Ravichander is composing music for the film, which is his first for a Kamal Haasan-starrer.

Vikram has cinematography by Girish Gangadharan and editing by Philomin Raj. The film, produced by Kamal Haasan’s Raaj Kamal International, is set to hit screens on June 3.