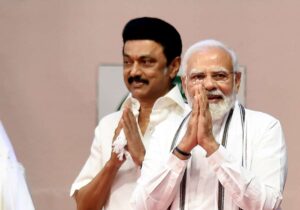 Chennai : Tamilnadu Chief Minister M.K. Stalin has urged Prime Minister Narendra Modi to organise at least three meetings of the Inter-State Council every year and table the agenda for discussion at the next meeting that strengthen the spirit of co-operative federalism which is the backbone of our Constitutional framework. In a Demi-Official letter to the Prime Minister, copies of which were released to the media here, he said if the Council meets regularly, it would serve as a bridge between the Union and the States and would be mutually beneficial to all its members. He said Article 263 of the Constitution provides for the establishment of an Inter-State Council, which is a platform for all States and the Union government to discuss subjects in which they have common interests.

Pointing out that a permanent Inter-State Council was established vide Presidential Order dated May 28, 2990 and Clause 5 of the Order mandates that Inter State Council meetings shall be conducted thrice a year, Stalin said, however, over the last six years, this meeting was conducted only once, i.e. on July 16, 2016 at New Delhi. “I am happy to learn that recently, on May 22, you have re-constituted the Council. Since the purpose of the Council is to strengthen, advance and support the spirit of co-operative federalism, I urge that the meetings areorganised regularly”, Stalin said, adding, the Council would provide a common platform for the Chief Ministers to put forth their views of the people of the State on the policies, legislations and actions of the Union Government. “Further, I strongly suggest that every Bill of national importance that is likely to affect one or more States should be placed before the Council before it is introduced into Parliament, and the views of the Council are also tabled before the Parliament at the time of introduction of such Bill.