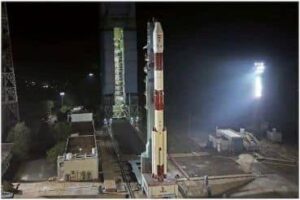 In its second dedicated commercial misson, India’s workhorse launch vehicle PSLV-C 53 on Thursday successfully launched three satellites from Singapore from the SHAR Range here.
After a smooth 25 hour countdown during which propellant filling operations were taken up in the launch vehicle and after the Automatic Launch Sequence (ALS) was initiated, the 44.4 m tall four stage vehicle with a lift-off mass of 228.433 tonnes, took off majestically from the Second Launch Pad at 1802 hrs.
PSLV-C53, the second dedicated commercial mission of NewSpace India Limited (NSIL), successfully injected the three satellites in the desired orbit about 20 minutes after a text book type lift off and after the ignition and separation of all the four stages.
The first two satellites are 365 kg DS-EO and NeuSAR, a 155 kg satellite both belonging to Singapore and the third satellite is a 2.8 kg Scoob-1 of Nanyang Technological University (NTU), Singapore.
Jubilant scenes were witnessed at the Mission Control Centre as India’s homegrown rocket first injected the DS-EO satellite about 1,077 secs afer lift followed by the injection of the other two satellites.
Addressing the Scientists from the Mission Control Centre, ISRO Chairman S.Somnath said the mission was succesfully accomplished and PSLV-C53 placed all the three satellites into the desired orbit much to the utmost satisfaction of the customers.
He also congratulated the entire PSLV team for the success of the mission.
This is the second mission from the SDSC this year after earlier PSLV mission on February 14.
Tags:PSLV-C53 successfully launches 3 satellites