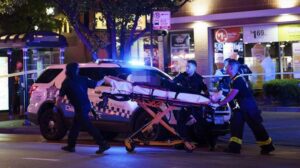 At least six people died and 30 were wounded after a mass shooting erupted during an independence day parade in a Chicago suburb in Illinois, USA, authorities said Monday. News agency AP reported that many parade go-ers, some wounded and bloodied, flood the area. Witnesses described seeing bloodied bodies covered with blankets as hundreds of people ran for safety.

The Chicago Sun-Times reported that the parade began around 10 a.m. but was suddenly halted 10 minutes later after shots were fired. A Sun-Times reporter saw blankets placed over three bloodied bodies. Several witnesses told the newspaper that they heard gunfire.

Police told people: “Everybody disperse, please. It is not safe to be here.”

Video shot by a Sun-Times journalist after the gunfire rang out shows a band on a float continuing to play as people run past, screaming. A photo posted to social media appeared to show pools of blood near upturned chairs in downtown Highland Park.