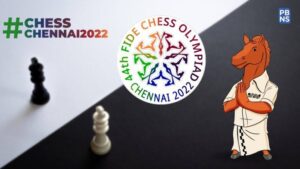 The Nehru Indoor Stadium here sparkled with classy lighting, and a sense of excitement was palpable during the inaugural event for the 44th Chess Olympiad. The sprawling arena in downtown Chennai was buzzing with fresh ideas represented in the form of elegant decor with the undercurrent being the nerve-wracking game of chess.

The classy lighting displayed multiple colours everywhere and the magic of light embossed on the foreground a grand, big chessboard and the flags of participating countries.

The stadium’s dais was decked with king-sized brightly coloured chess pieces of king, bishop, rook, queen, knight and the pawns. A special dance-song ”Vanakkam Chennai, Vanakkam Chess”, was screened. An audio visual on the theme of sand-sculpting captured the game of chess to be played in Tamil Nadu’s historic sea port town of Mamallapuram.
With an orchestra playing pulsating music, teams from dozens of countries including Japan, China, Australia, Germany, Italy, South Africa, Austria, Albania, Algeria, Angola, Argentina, and Barbados were welcomed to unceasing rounds of applause in the stadium. ‘Jai Ho’ was among the Indian instrumental music played while ‘Vande Mataram’ was rendered.