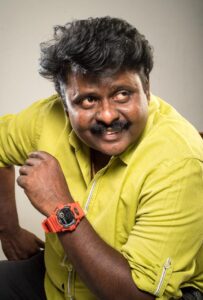 Though he made a good start to his acting career, actor GM Sundar had to wait for almost 15 years to make his headway in the industry. And his patience, perseverance and hard work did yield him right results. Today he has become a name to reckon with in Tamil cinema. With a string of meaty roles in many critically-acclaimed and blockbuster films, GM Sundar is on a purple patch now.

Speaking to News Today, GM Sundar says, ‘Though I was on a hibernation for few years, I was confident that my heydays will be back. I was keeping myself update about everything in cinema and was a regular in several international.film festivals.Method acting has always been my cup of tea’.
Thanks to Nalan Kumarasyamy happened my comeback with Kadhalum Kadanthu Pogum. It was an unique role and gave my all limelight. My comeback was appreciated, he added.
What followed were a string of very good roles written for him by young generation of filmmakers be it Sudha Kongara (Soorarai Pottru),Madonne Ashwin (Mandela) and Pa Ranjith in Sarpetta Parambadai.
Sundar who is part of Karthi ‘s Viruman says, ‘I got a call from filmmaker Muthiah. He insisted that I should do the role. It has a graph to it. From negative shades to a do-gooder. I shot in Theni, and it was a great experience’.
Films like Mandela and Sarpetta won me many fans. My performance has been adored by younger generation of audience and new gen filmmakers.i feel more responsible now for expectations are high on me, says GM Sundar.
I am sure that there is plenty more to come from me. Variety is the spice of life and I should keep giving my best and engage and entertain audience, he said
Tags:GM Sundar VirumaNn Mandela Sarpetta