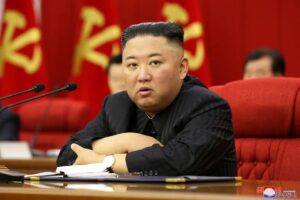 North Korean leader Kim Jong Un on Thursday declared victory over Covid-19 at a national meeting where his sister, in an especially combative speech, said Kim had suffered a fever himself and laid dubious blame against South Korea for the outbreak while vowing deadly retaliation.
The North’s official Korean Central News Agency said Kim ordered preventive measures eased just three months after the country first acknowledged an outbreak, claiming the country’s widely disputed success would be recognized as a global health miracle.
Seen delivering a speech on TV for the first time, his powerful sister said Kim had suffered a fever while glorifying his “epoch-making” leadership and she blamed the North Korean outbreak on leaflets flown from across the border from South Korea.
North Korea’s statements about its outbreak are widely doubted and are thought to be aimed at helping Kim maintain absolute control of the country.
Some experts believe the victory statement signals Kim’s intent to move to other priorities but are concerned his sister’s remarks portend a provocation.
South Korea’s Unification Ministry, which handles inter-Korean affairs, issued a statement expressing strong regret over North Korea’s “extremely disrespectful and threatening comments” that were based on “ridiculous claims” about the source of its infections.
North Korea first suggested in July that its Covid-19 outbreak began in people who had contact with objects carried by balloons flown from South Korea — a questionable and unscientific claim that appeared to be an attempt to hold its rival responsible.