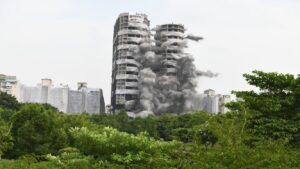 It took 12 seconds to raze Supertech twin towers in Noida to the ground on Sunday, said Jet Demolitions Managing Director Joe Brinkmann. Edifice Engineering hired by the developer for the task had collaborated with South Africa’s Jet Demolitions for the job.A series of controlled explosions reduced the illegally built twin towers to a massive pile of rubble.Apex (32 storeys) and Ceyane (29 storeys) were gone in seconds, in the carefully choreographed and meticulously executed demolition — the biggest such exercise in the country so far.Local people watched from vantage points picked days in advance. Many others had travelled to Noida for what could be a once-in-a-lifetime spectacle, as 3,700 kilos of explosives bored into the pillars and walls of the two residential buildings went off in quick succession.The apex court had pointed at the “collusion” between the builders and Noida Authority officials who let Supertech Ltd construct in the area where no buildings were to come up according to the original plans.Just after 2.30 pm, the floors of the twin towers collapsed onto each other in a stack, which sat amid other complexes in sector 93A in Noida, an Uttar Pradesh city that adjoins New Delhi.