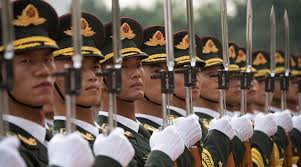 China is intent on spreading its influence around the world, and not far from its own borders it has found a willing accomplice in the form of Cambodia’s authoritarian Prime Minister Hun Sen.

As well as a regular stream of weapons and military equipment to the kingdom from the vaults of China, there is mounting concern over a potential Chinese military presence at Cambodia’s naval base in Ream.

Indeed, in recent satellite imagery there are disconcerting indications that the site is being prepared for an HQ-9 surface-to-air missile (SAM) battery.

Such a possibility was first raised by Tom Shugart, an Adjunct Senior Fellow with the Defense Program at the Center for a New American Security.

Shugart noted that a road along the eastern edge of Ream Naval Base now features a number of paved pads or enlargements cut out of the jungle, something that is obvious in a satellite image from June 2022.

The academic noted that the design of the road with multiple 10-12m-deep laybys closely resembles an installation that the PLA built to protect Yalong Naval Base on Hainan Island in about 2016.

It must be noted that China has deployed HQ-9 SAMs to its military installations on Woody Island in the Paracels, and to three other reefs in the Spratly Islands (Fiery Cross Reef, Subi Reef and Mischief Reef), in the South China Sea.

Tags:and not far from its own borders it has found a willing accomplice in the form of Cambodia's authoritarian Prime Minister Hun Sen.China is intent on spreading its influence around the world