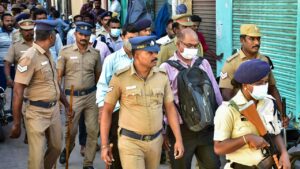 Chennai : The Tamil Nadu police is set to seal the Popular Front of India (PFI) offices across the state in the wake of the Ministry of Home Affairs (MHA) banning it and its affiliated organisations.On September 22, the National Investigation Agency (NIA) swooped down on the PFI and its leadership across 15 states. The national agency recorded the arrest of 45 people, including its national chairman, OMA Salam, national general secretary, Nasarudhin Elamaram, its intellectual face, Prof P. Koya.Sources in the state home ministry said that the home secretary of Tamil Nadu would soon issue a circular leading to the sealing of the offices of PFI and its affiliated organisations like the Campus Front of India, Women’s Front of India, Rehab Foundation of India, and others.A senior officer with the Tamil Nadu Police said that there would be arrests in many cases that are registered against the PFI functionaries.