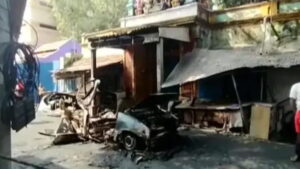 Chennai : All the six accused who were arrested in connection to the Coimbatore car blast case were transferred to the Puzhal Prison in Chennai from Coimbatore Central prison late on Monday night.The six accused who were shifted to Chennai Central Jail are Mohammed Dalqa, Mohammed Azharuddin, Muhamed Riyaz, Firoz Ismail, Afzar and Muhammad Nawaz Ismail.Five of them were caught on a CCTV camera outside Mubeen’s home on the day of the explosion. They were carrying what seemed like a heavy object that was wrapped in a plastic cover.Last week, the NIA officials investigating the car blast that rocked Coimbatore on October 23, recovered notes and flow charts depicting Jihad from the residence of Mubeen, the man who died in the explosion.