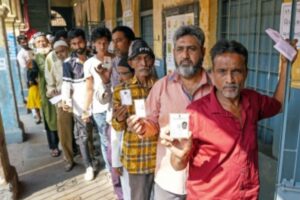 A moderate voter turnout of 60.94 per cent was recorded in the second and final phase of the Gujarat Assembly elections covering 93 seats across 14 districts of north and central regions on Monday, the Election Commission (EC) said, a sharp drop from 70 per cent polling registered in these constituencies in 2017.Gujarat Chief Electoral Officer (CEO) P Bharathi said barring a few incidents of violence, polling for the final phase went off peacefully and electoral fate of 833 candidates were locked in Electronic Voting Machines (EVMs).With this, voting for all the 182 Assembly seats in Gujarat has been completed and counting of ballots will be taken up on December 8. The first phase of elections on December 1 had covered 89 Assembly seats and recorded 63.31 per cent polling.Around 5,000 voters abstained from voting at six polling booths in three villages of Mehsana district over local issues, she told reporters.Provisional voter turnout stood at 60.94 per cent in the second phase of elections covering 93 seats, said the EC.The elector turnout in these 93 Assembly seats in the 2017 elections was 69.99 per cent.Gujarat had registered 68.41 per cent voting in the 2017 Assembly elections.Among districts, Sabarkantha recorded the highest turnout at 68.33 per cent, followed by Banaskantha at 65.65 cent, showed the provisional figures released by the Election Commission.