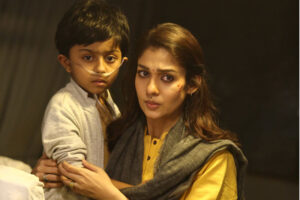 O2, directed by Vignesh GS and produced by Dream Warrior, is an out-and-out Nayanthara show. Released directly in Disney Hotstar, it speaks about a single mother fighting to save his ailing son.

A strong message to preserve nature for a better tomorrow is what the movie tried to convey.

Nayanthara plays a single mother of a child, who is fighting for the life of his little boy life every day.

The boy has a medical condition that doesn’t allow him to breathe without a breathing aid.

He constantly needs oxygen support to stay alive. The boy and the mother take a bus to the hospital in Cochin to take part in the surgery.

En route to their destination, their bus falls into a massive hole. What happens then forms the crux. Rithvik plays Nayanthara’s son.

A group of people with different problem cone together in a bus where they fight for their survival. Anger, ego, agony, selfishness prevail there.

Nayanthara has given her best. She pours right emotions and holds the movie together. Rithvik sparkles. He us cute and comfortable before the camera.

Bharath Neelakandan in a negative roles sparkles. All characters have a meaty role to play.

Tamil A Azhagan has cranked the camera and music is by Vishal Chandrasekhar. Both compliment each other well. Three cheers to Sathish for the art work.

O2 is a engaging fare with a solid message.