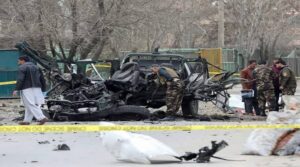 At least two blasts were reported from near a gurdwara in Afghanistan’s capital on Saturday. Explosions hit a busy road near a Sikh-Hindu temple in Police District today in Kabul, Xinhua News reported citing eyewitnesses. “The sound of explosions was heard in Karte Parwan area of Kabul city. Details about the nature and casualties of this incident are not yet known,” Tolo News also tweeted today.

In October, last year 15 to 20 terrorists entered a Gurdwara in the Kart-e-Parwan District of Kabul and tied up the guards. Also, in March 2020, a deadly attack took place at Sri Guru Har Rai Sahib gurudwara in Kabul’s Short Bazaar area in which Islamic State terrorists 27 Sikhs were killed and several were injured.

On May 25 this year, three explosions rocked the capital of Balkh province, leaving at least 9 people killed and 15 others injured. Meanwhile, on the same day, a blast at Masjid Sharif Hazrat Zakaria mosque in Kabul City left at least two worshippers dead, according to officials.